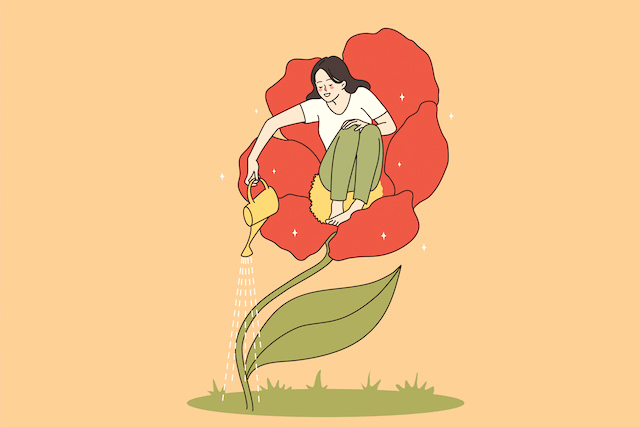 “A woman in harmony with her spirit is like a river flowing. She goes where she will without pretense and arrives at her destination prepared to be herself and herself only.” ~Maya Angelou

For as long as I can remember, I have struggled with feelings of inadequacy and unworthiness. I’ve grappled with the unshakable feeling that I am not enough no matter what I do.

As a child, I was labeled by my family as being “too much.” Too bossy, too selfish, too energetic, too emotional. So I did what many little girls do when faced by those messages: I tried to take up as little space as possible.

It started with me taking up less space mentally. I followed all the rules, stayed quiet when I disagreed with someone, and tried not to ask too many questions. A good girl behaves, after all.

When I was in middle school, I began to take up less space emotionally. My mother compared herself to a “basket case” when she cried, so I learned not to cry. My father told me to “change my environment” to change my mood.

I began to compartmentalize my feelings and avoid feeling “bad emotions.” To escape those uncomfortable feelings that I had labeled as bad, I would eat junk food and watch television. Above all else, I avoided being angry, because nice girls don’t get angry.

The last step in shrinking myself occurred when I began to take up less physical space. I have been overweight for most of my life and remember first feeling self-conscious about it in third grade. As I grew older, I would spend a lot of mental energy trying to take up less space for there to be more room for other people.

I would squeeze my thighs and elbows together on airplanes and buses to give other people more legroom. In high school and college, I would sit with my stomach squashed against the desk so people could walk more easily behind me. Unconsciously I strived to keep myself small and take up less breath so other people could have more oxygen.

This went on until I was twenty-seven years old. I had graduated from medical school in South Dakota as the pandemic began picking up speed and went on to start my training as a general surgery resident in California. Unbeknownst to me, this training program would lead to my tipping point.

At that surgery program, gossip ran rampant, criticism of the status quo was punished, and all residents were expected to keep their heads down at all costs. Two months into my training I was called into the program director’s office without warning.

I was given a verbal warning not to “go over people’s heads” because of an occasion in which I asked the on-call physician a question related to a patient’s care plan to clarify my safety concerns for that patient. In the program’s eyes, it was not appropriate for a new resident to question the decisions of a more senior resident, for any reason.

During those thirty minutes I was belittled and threatened. It didn’t matter that I had been working eighty hours per week with minimal supervision and dangerously high patient-loads. Nor did it matter that I had lost ten pounds in my first month of residency because I didn’t have the time to eat or drink or use the bathroom.

No matter how small I tried to make myself, I was told that I was still too much. After giving up almost everything I had for the sake of others, I realized that if I were to give up any more space it might end my life.

That was the moment something shifted inside of me. It felt like a light switch flipped in my brain. I had a profound sense of clarity that I couldn’t continue down the path I had been taking.

From that moment on I began reclaiming my space. I ultimately left that program after finishing my intern year and moved to the East Coast to begin training at one of the most prestigious psychiatry residencies in the U.S.

After three months in psychiatry residency, I realized I still needed more space. So I resigned from my job, bought a seventeen-passenger shuttle bus to convert into a living space, and moved in with my boyfriend to save money.

I now have my own office in a co-working building, and I am creating the life of my own design. That’s not to say that my life is all rainbows all the time. I still have $200,000 in student loan debt to pay down and a lot of hard work ahead to build my business, convert my bus into a skoolie, and continue to grow as a person.

But for the first time since I was a child, I look forward to waking up in the morning. I’m beginning to dress my body in clothes I enjoy, to express all my emotions (including anger), and to reclaim my space as a human on this planet.

Despite everything that makes us feel afraid, guilty, or ashamed, we are called to live our lives authentically and unapologetically.

Making ourselves small does not benefit others. In truth, when we lay claim to the space we need to grow, we create more room for others to do the same.

Ask yourself if you have enough space to grow. Are you giving yourself the space you need to feel your emotions, to live in your body fully, and to express your thoughts and beliefs? If not, what is holding you back?

I still struggle with feelings of inadequacy at times, but I hope you’ll join me in reclaiming the space we need to embody who we were meant to be.